And while the one bathroom deal is a bit crazy, you would be surprised to find out that it’s not such an odd existence. A lot of families have to do it. I am from a family of 6 and we only had one bathroom most of my young life. My parents would temporarily host families and we enjoyed many gatherings growing up ~ we always had an excuse to cook out and have folks over ~ one bathroom was never an issue.

Actually, I got to live in a house with more than one bathroom when I was in high school, and as a married couple this is our third house. We have lived in two different 2-1/2 bath homes and we always utilized just one of the bathrooms. I figured out early on that the least amount of bathrooms we used the less amount of cleaning there was to do. It’s a clear win-win for me!

So one bathroom is not such a hard pill to swallow. But, when we purchased our lil’ old ranch, we knew the bathroom would have to go!

Here is a little video of the before bathroom:

As you can see, the original pink tile from 1953 was still holding it ALL together. But the house had seen its fair share of owners, we know of at least four by name, one was an investor. It needed a fresh update!

One of the families that previously owned the house spray painted over the pink and as you can see, that did not end up so hot! Shown below:

Our main goal was to make the one family bathroom as comfortable as possible for five, but make it fit with in the original floor plan.

It was pretty neat to find out that after so many years there were no issues under the tile, like dreaded mold. The tile was placed directly on an old school substrate of concrete and wire mesh that was at least 1″ thick.  No water gonna mess with that!

Being in the shower door business there is a constant string of people who find themselves remodeling because of the lack of protection behind the tile and/ or in a jam because of bad tile workmanship. I am asking my hubby to help me put together a little post on what to expect from your tile man or lady 😉 to get the most out of your bathroom renovation. He was our tile guy/plumber/framer/trim guy/architect by the way.

So the best option was to move more walls. I shared last week about the kitchen and wall re-configuring here. But basically the space that was once the bathroom stayed. We moved walls out into the hallway and over into the old main entry. That space we took over is shown here:

The open bi-fold doors is now space that is part of the new laundry.

We expanded the bathroom into this hall

Old main door getting closed off  below left. New laundry and bath walls being modified below right. 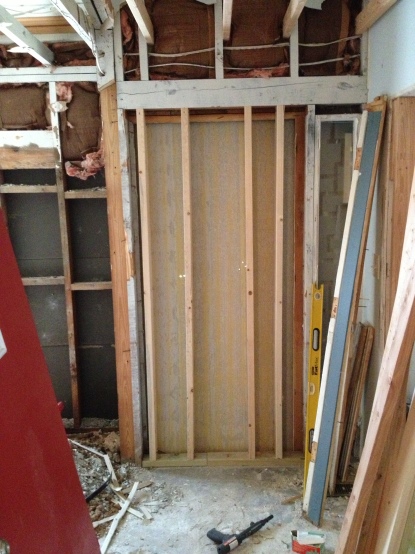 Old main door getting closed off

Ryan is not a professional plumber, but he has vast experience with bathroom remodels. With that and the fact that we were practically still using the same bathroom space, he was able to confidently do all the plumbing for the shower, sink, toilet, and laundry himself. Shown below:

Do not ask me what any of this is 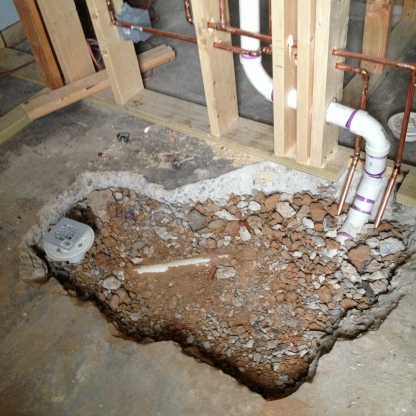 why is there a hole there?

Then we have the issue of the laundry being in the kitchen. I wash regularly to avoid pile-ups. But try as I may, pile-ups happen. So we needed to create a space where our clothes could be placed and easily hidden from guests, and sometimes even hidden from me! The dread of washing, meh…

I am assuming this made more sense because of plumbing?

Below: Once the walls were drywalled and plastered. You can see the large opening to the right is now the laundry, and the door to the left of that is the new bathroom door.

the hallway leading to the laundry, bathroom and bedrooms

to the right is a large opening where the new laundry closet is. To the left of it is the renovated bathroom doorway

Here is the new laundry and bathroom after:

~word of warning: the house is not sprawling, so it was quite difficult to get decent shots. For example: I had to open the window and shoot from outside the house to get a better look at the shower glass front~

A laundry room was not going to happen with the already tight space, so we opted for a laundry closet. It is a multi purpose space for us. In the past we have utilized it to store some camping gear, toys and now school books and board games. It’s that space I always rotate endlessly. I found this really useful article on the Lowe’s website to get your creative juices flowing. 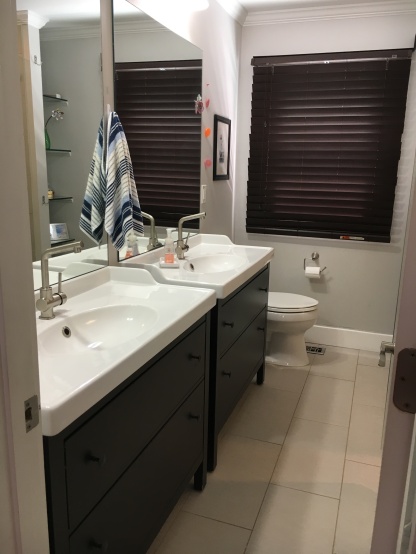 The new entry for the bathroom 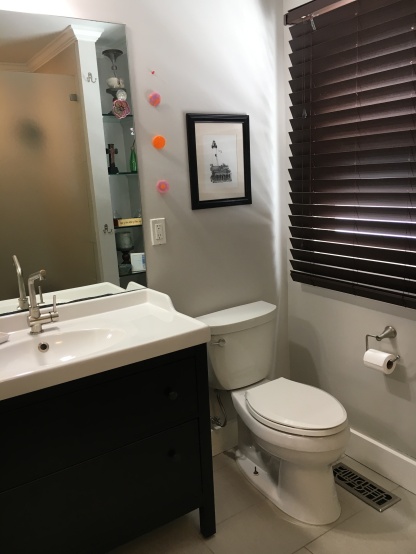 The vanity space is big enough for more than one person to use at a time. And you wont be shocked when I tell you that the cabinet, faucets and sink are all from Ikea. I know, I know… I swear we look for things at other stores and it seems like Ikea is one of the few places that caters to lil’ homes like ours.

The walk in shower is roughly 41-1/2″ x 44-1/2″ of floorspace, plus the seat and step over ledge. The rain shower head (this is not the exact one, ours was a few hundy cheaper but the same idea) and handheld fixtures, both are from faucetdepot.com. These are awesome for giving our Allie dog baths (spoiled puppy), and they are kid height as well so they utilize them a lot. Here’s a fun little tidbit about these, water can run from both heads at the same time! The handheld makes cleaning the shower  way easier too.

There is a seat in the shower. It is wonderful for shaving and while I never sit down on it ~ I am just weirded out about that kind of stuff ~ I guess it’s the next closest thing to relaxing in the tub. For the kids it’s a great place to make a race track on. 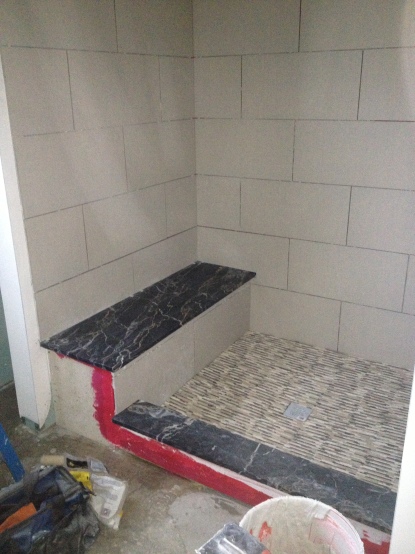 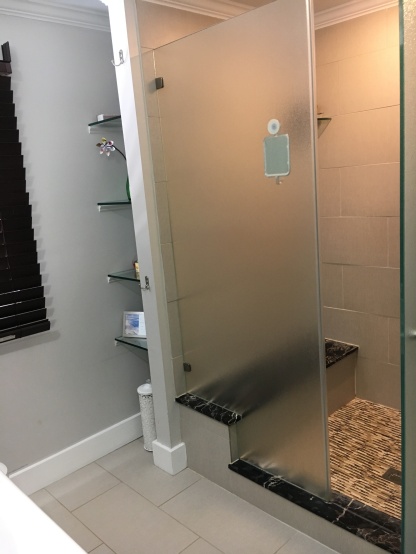 There is a niche with glass shelves to the left of the shower that was supposed to be for extra towels, etc. I use it for placing decorative knickknacks, since we have a linen closet in the bathroom (below in the right hand picture). 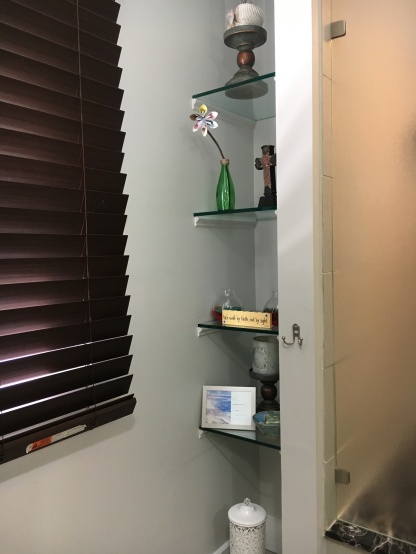 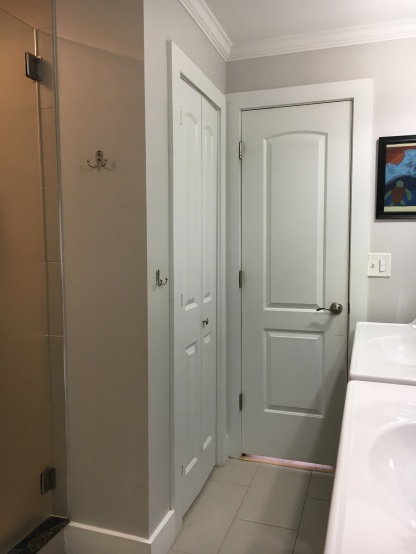 And here is a floor plan:

I can’t forget to mention that the shower door, glass shelves and mirrors came from our business, Chattahoochee Shower Doors. *I am not getting paid to advertise for them or anyone else mentioned above. When and if I do I will be sure to let you know ;-)*

While the bathroom is not completely private for several people to use at one time, we have managed just fine. The truth is, we have applied simple manners and trained the family unit that before anyone enters the bathroom we warn the others that the facilities could be temporarily unavailable. I admit, I am probably the worst at this. I am usually the one getting knocks on the door, haha! Still there are no fights.

Our kids are learning a lot from it too. They realize that everything is shared, the toothpaste can’t be left smeared in the sink. That they can’t take too long out of respect that others have to use the bathroom too.

Our daughter is the best. She waits until everyone has had their turn and then she feels free to go in and take her time. No one will nag her and she won’t nag others to hurry. She knows she’ll get a chance to brush her hair 100 times and stare at her pretty face as long as she wants when her turn comes. And she does… haha!

Bottom line is no one is entitled to their own bathroom. At least in this house 😉

Together Is Our Favorite Place To Be

Together Is Our Favorite Place To Be